Time for my annual inspection of the Three Lamps (or more picturesquely, Three Candles) neighbourhood in Macau. The area is similar to Hong Kong’s Mongkok before parts of it like Temple Street went themed-tourist-zone and others were buried under shiny 60-storey monstrosities-on-podiums like the Urban Renewal Authority’s Langham Place. I like to check this precious stretch of undisturbed urban ecosystem from time to time for signs of degradation, and I am pleased to find that there is still plenty of it.

1 Now here’s something you don’t often see in Canto-land: lamb. From Beijing to Kashmir to Ireland, people have found delectable ways to cook baby sheep. The southern Chinese, on the other hand, don’t even like the stuff, considering it to have a gamey quality like that of unseasoned fish. In this case it is stewed with sheets of tofu in a surprisingly spicy gravy (perhaps to disguise its shocking taste from the delicate local palate), but not well enough to be

truly tender and with the thick rubbery skin intact. So this will not go down as one of the great moments in the preparation of small-ruminant flesh – but under the circumstances it is a commendable effort.

2 Perhaps not surprisingly, the cooked meat stall fronts a gastronomically eccentric store. Along one wall are shelves displaying big packs of spice and jars of sauces, including curry preparations from India, no less. It is not a great range, but again it is surprising to see it here at all – suspicions that there is little demand for such ingredients in this district are confirmed by the general dustiness of the packages. On the opposite wall, across long freezers full of ice-hard chops and fishballs, the shop offers quasi-medical tonics made from extracts of various mammals and reptiles, including bottles of liquid Viagra courtesy of our friend the deer. So that’s what it’s made of.

3 A few doors along we have a fresh sesame- and almond-drink place. This is something new, hip and modern and could be seen as threat to the traditional griminess of the local environment, but it is pleasingly low-tech and smells nice. Electric mills grind up the seeds and nuts and deposit the mushy pulp into containers, which a girl takes behind the counter, where they dilute it and serve it. Needless to say it is good for health, especially the skin. This plus the price of MOP10 a cup seems to guarantee a long line of customers.

4 Many of the stalls on the side streets and alleyways sell the usual fresh food you find in similar markets anywhere in this part of the world. Crowds thicken in early evening, when vendors start to reduce prices, typically by offering them on a generous per-piece basis rather than by weight. You also get the planet’s cheapest clothing (a pair of jeans for MOP10?), and all sorts of dry foodstuffs. Among these are the various fungus-moss life-forms much prized in Guangdong for their nasty sliminess and complete lack of flavour. For a quick hit of the undoubted nutritional benefits offered by these commodities, you can always take a swig of this delicious-looking mushroom juice. This business hasn’t been the same since the sesame milk-shake joint opened. Progress is not always a bad thing.

5 A few hours later, back in Hong Kong, and the already much-prostituted, processed and sanitized Lan Kwai Fong counts down the weeks to the opening of the Hard Rock Café. This next episode of the long, dismal descent of the bar district into a carbuncle full of tourism-pus aimed at emerging markets’ eager new travellers is hardly unique around the Pearl River Delta. Macau now has a Playboy Club, complete with bunnies, where fat nouveau-riche peasants can sit around, smugly wallowing in their extreme coolness as bimbettes with floppy ears light their cigars and pour their burgundy.

Three Lamps is more than just a welcome relief from the ever-encroaching tackiness. It is a step into the past – a place out of the 1980s, when ordinary people could afford the rents to sell ordinary or not-so-ordinary things to other ordinary people at affordable prices. And plastic bags were still legal. The ultimate twinge of nostalgia comes at the sight of cheap clothing emblazoned in mangled English. I though this stuff died out ages ago, and here it still is in the backstreets of grimiest Macau. It is hard to believe that the Hugo Boss and Tommy Hilfiger bulldozers are not rumbling in the distance. 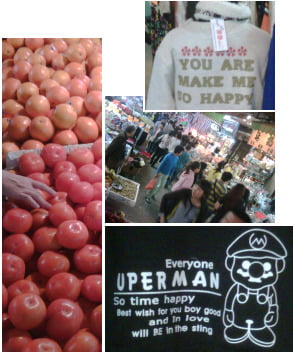 This entry was posted in Blog, Reviews. Bookmark the permalink.

3 Responses to Three Lamps shine on