Or: ‘Why, sometimes I’ve believed as many as six impossible things before breakfast’

This picture entitled Shackled and Abandoned, kindly sent to me from the corner of Tonnochy and Jaffe Roads in Wanchai, has raised a few laughs… 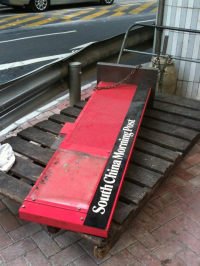 But then, also, a question: why does Hong Kong’s western population love to hate the South China Morning Post so much? Why do some normally sweet and tolerant folk curl at the lip and spit out the phrase ‘ScumPost!’ whenever anyone mentions the 107-year-old (this Saturday) daily?

Maybe it’s a piece of crap, and that’s the end of it. One routine, traditional complaint is that its international coverage is all pulled off wire services and cut and pasted from yesterday’s New York Times – as if a minority-language paper in Hong Kong (in 2010?) is going to maintain a chain of bureaus across the world. Obviously, the pages of overseas news in the middle are aimed at people who don’t keep up with foreign events on the internet or through international organs like the FT or IHT.

The SCMP’s only value – and only hope of offering value – to the expat audience is in conveying local and, in the editors’ dreams, Mainland information, reportage and analysis in English. Everything else is on-line. Japan, South Korea, Taiwan, Thailand and Indonesia have comparable publications, and the last time I checked they were worse than the SCMP: more insular, more propagandized, more amateurish. (They all lend themselves to mockery; don’t miss Bangkok’s brilliant Not The Nation*.) Anglophone Asia does no better. This doesn’t make the SCMP a leading journal of record, but imagine being trapped in an elevator for two hours with only a copy of the Manila Bulletin or Singapore’s kiddy-brainwashing Straits Times.

One reason the SCMP attracts resentment in certain Hong Kong circles is that (as with fellow gripe-magnets Cathay Pacific and HSBC) it dominates in its market and customers perceive little other choice. Alternative sources of English-language Hong Kong news are few. The Standard is translated from a lightweight Chinese-language counterpart that adores scandals and tycoons (giving it a curious English-market niche of its own). RTHK3 is good given that it broadcasts mostly radio-length snippets. Outside the realms of listings and business information, the SCMP has at least a semi-monopoly. With so little competition, the surprising thing is that it isn’t worse.

Like many Hong Kong media outlets these days, the SCMP is owned by a wealthy, pro-Beijing businessman. The theory is that these tycoons make the journalists censor themselves and in return, the Chinese government gives them commercial advantages or protects their interests. There is little visible evidence that it makes a difference. Plenty of Hong Kong’s elite have done OK in the Mainland without owning a bit of the Big Lychee’s press. Australian Rupert Murdoch found media holdings were more trouble than they were worth in developing ties with China. The tycoon who bought the SCMP from him, Robert Kuok, might agree; it must be a headache constantly wondering if one sentence among your newspaper’s hundreds of stories a week has offended a thin-skinned top official who certainly won’t mention it directly. And print media has been a lousy investment since the web came along.

A couple of well-respected writers on China have left the SCMP over the years, which isn’t a huge casualty rate (Willy Lam is still writing, after all – they didn’t salvage him). Editors seem to come and go every 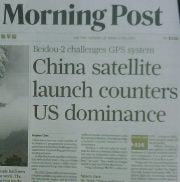 couple of years. But how many readers who just want to keep tabs on what’s going on have noticed major swings in quality? Jingoistic headlines like yesterday’s about China reinventing the wheel with its own GPS system might seem jarring to those who took the paper’s pro-British stance for granted in the 1980s. But a dash of nationalism is not unusual in Hong Kong media in 2010; the majority of SCMP readers are Chinese; and it’s no more pandering than many western press reports about the Yuan and jobs. (And is it just me, or does the heavy-handed patriotic stuff tend to be mostly on the front page, where it will most effortlessly set nervous owners at ease?)

What’s inside? The SCMP local news coverage is less sensational and less dreamed-up than average for Hong Kong’s lively press (hence the large Chinese-literate readership). It’s hardly their fault if nothing interesting happens…

The lengthy impermeability of the ‘National’ pages is, if nothing else, a useful daily reminder of what country we are in (for all of us, including the Hong Kong Chinese businessman who recently noted that he can name all 50 US states, but can’t recall most of China’s 30-whatever provinces). I don’t suppose anyone reads them enough to detect a pattern, but the editorials seem to be written to ensure a level of blandness fit for the most opinion-averse owner; it must be hard, unrewarding work, churning them out day after day. The letters page can be, to be charitable, an amusing freak show; the Harry and Ming cartoons occasionally seditious by many regional standards; the Op-Ed articles vary from interesting to stunningly vacuous (hardly surprising since, as I understand it, the SCMP doesn’t pay for most of them – it’s amazing anything fills the space at all). Zipping past the latest Enoch Yiu shoe-shining profile, we find business columns like Jake, Tom Holland and Shirley Yam that can make it into ‘provocative’ territory. The website is sealed off behind a paywall and clunky, as you would expect of a channel with a monopoly supply of material with small market demand. Now try the Hong Kong edition of China Daily.

So, SCMP: crap, perhaps, but not really bad crap under the circumstances.

*A bit more on the limitations of print media.

20 Responses to The South China Morning Post: a contrarian view