Tycoons not immortal and slowly realizing it

Former Liberal Party leader James Tien, the (allegedly) shallow inheritor of an unearned textiles fortune, does his bit for the long overdue campaign by Hong Kong’s tycoons to address the fact that everyone increasingly hates them. “We used to think our role was just to boost the economy and create more jobs,” the South China Morning Post quotes him as saying; now he and some business buddies will set up a foundation to pay for old folks’ cataract operations and give students interest-free tuition loans.

Unlike the Centum Charitas band of rich-kids playing at being do-gooders, this group does not seem to be orchestrated by Beijing’s local representatives (not least because the cadres would have chosen someone less unlikable and witless to front it). Indeed, it could be that the nation’s leadership are the prime intended audience for what is – you can guarantee it if Tien is involved – a superficial and naïve little PR stunt.

While it would be going too far to suggest that the Chinese Communist Party is reassessing its close ties with the Big Lychee’s parasitical inherited wealth and cartels, there are unmistakable signs of a shift in emphasis. Beijing’s concession to the Democratic Party over the 2012 electoral reform package came as a shock to people who see themselves as an exclusive business elite entitled to unique access to power.

Meanwhile, the Hong Kong government seems to be losing patience, in its own snail-like way, with the grander and grander excesses of the property developers. Two examples are the slight clampdown on exploitative and deceptive real estate marketing techniques, and the cruel official humiliation of Henderson Land over apparently phony apartment sales to ramp up 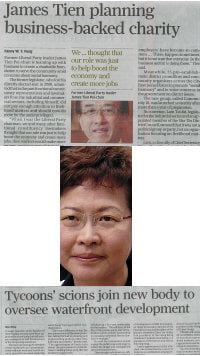 prices. A third may be on the way if Development Secretary Carrie Lam manages to scale back the scam that allows developers to build much bigger projects in exchange for including ‘green’ features like vast club houses that – amazingly – simply further boost their own profits (and, I am told, increase their long-term gouge-grip on residents via the voting power the multiple swimming pools and other facilities give them in condominium owners’ committees).

It could be that amid all the fretting about the Big Lychee’s creeping disharmony and radicalism, some officials are starting to muse over the possibility that the privileged blood-sucking, rent-seeking freeloader likes of Tien are part of the problem – and it is starting to dawn on Tien and Co.

As if to assure everyone that the tycoons have not fallen from grace, the curious nurturing of their offspring continues, with the aforementioned Carrie putting not one, not two, but three junior plutocrats into the new Harbourfront Commission. (To paraphrase the SCMP: Benjamin Cha, grandson of Cha Chi-ming of HKR International, lord of the Disco Bay manor; Lily Chow, daughter of Chow Yei-ching of Chevalier, which has just sold 80% of Pacific Coffee for HK$360 million [note to self: worth marrying?]; and Eric Fok, son of inactive legislator Timothy and grandson of Henry, patriotic exporter of embargoed materiel to the motherland during the Korean War.)

While some will resent this as a blatant reward for being born into a rich family, there is something more subtle going on. Carrie is cunning (not to mention hungry for public acclaim in 2012). It’s a cheap way to give a bit of face to the proud fathers, and a similarly cheap way to have them owe you one; the next step a few years on is to dangle the prospect of a Justice of the Peace tag for the kids before their dads – they will do anything. More important, in time it will probably put these scions into a painful position.

A seat on a sensitive advisory committee whose work will be watched by every environmentalist, heritage freak and post-80s radical is a double-edged sword. A pat on the head, perhaps, but also a recipe for extreme public opprobrium if you are caught showing any sympathy to a property company, having any truck with an inch of reclamation or touching a single hair on some baby dolphin’s head. As popular discontent swells, and our feudal business elite’s date with the noose draws nearer, these tycoon-kids are being thrown in the deep end. The local traditional business community that they will one day inherit needs to be rehabilitated, and it will take more than a frivolous Victorian-style James Tien charity for the ragged poor.

6 Responses to Tycoons not immortal and slowly realizing it