The poor come to visit

Some government departments have too much money, and it shows. The Hong Kong police, when they are not raiding trendy T-shirt shops or confiscating statues, like to dress their surplus men up in big macho boots and berets and send them strutting around the streets looking as unpleasant and unapproachable as possible to check the ID cards of people with brown skin. Public works officials, petrified of seeing their budgets slashed if they don’t spend it all by the end of the financial year, install railings and paving slabs on unvisited hillsides and concrete foundations beneath remote boulders that have been immovable since the Middle Cambrian era. And then there’s the bureau that gives low-income families guided tours of my neighbourhood.

No-one asked whether residents of the lower Mid-Levels wanted to host Family Joy Tours, as the Commissioner for Heritage’s Office is calling them. We just woke up one morning and found them all getting off their bus after their 45-minute ride down from the housing estate in Tsuen Wan. Their guide lectured them on the historical significance of the area, while an Information Services Department camera crew filmed the event. The visitors themselves looked around, slightly underwhelmed. 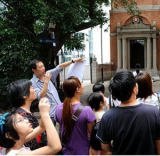 This was Hong Kong Island, where all the powerful people work in their shiny offices, and the rich folk live up the hill, and now they finally had a chance to be in the place and all they could see was old buildings that should have been pulled down ages ago: an unused police station with something carved in English along the top, a huge house that some Christian chief lives in, and these narrow streets of 1960s low-rises with glitzy-looking restaurants with no Chinese on the menus but huge prices.

We get our fair share of tourists wandering through the area – the first ones grappling with their maps while sweating in plastic raincoats were spotted just yesterday. They are usually Westerners or Japanese, in search of the mythical exciting dining scene. Then there are groups of Mainlanders, just released after four hours in a jeweller’s shop, riding on the Mid-Levels Escalator, which costs the tour company nothing, before being herded into the next retail death trap.

The New Territories visitors are not intended to have a good time. The idea, says the Heritage Commissioner, is community outreach. In exchange for a free ride on a bus, plus lunchbox, the working class get their minds improved through exposure to Hong Kong’s built history. It is rather like the school field trips we get from the same poorer and distant parts of town, with the teacher trying to look cool in front of her students by not joining them in staring at all the white people. The old buildings are OK to have your photo taken in front of, but it is the contemporary exotic – the soaring private apartment blocks up the hill and the strange inhabitants – they have probably come to see.

The irony is that this area was, until fairly recently, distinctly proletarian. Elderly men with T-shirts rolled up over their pot bellies worked toothpicks, women went to the hairdressers in their pyjamas, and kids played badminton in the street. Then the Escalator opened, and the gentrification happened. I remember this neighbourhood when it was full of people like you, I could tell the sightseers.

A couple of Filipino maids, overseen by a pair of impatient housewives, have scrambled up ladders to drape a huge banner across the road between the 7-Eleven and the fake Greek café. “Mid-Levels Residents Warmly Welcome Their Less Privileged Co-citizens. Please Take Your Litter Home With You.” 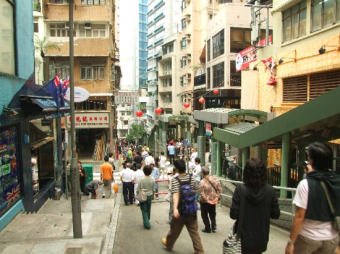 3 Responses to The poor come to visit