(It can only be an improvement.)

Is there any more interesting – as in cheap and easy – way to entertain a visitor to Hong Kong than show them around the neighbourhood?  When I moved into this slum area, it didn’t have a name.  It was a working-class buffer between the fast-sprouting fancy high-rises up the hill and the office blocks of the central business district lower down.  Old folks wandered around in their pajamas, traffic was so light that kids played badminton outside, and people would bring live or at least still-dripping chickens home from the market.  If there were any other non-Chinese in the street, I never saw them (this wasn’t so-called Marco Polo Syndrome on my part, just plain tight-fistedness).  Most of the local businesses were dingy, noisy print shops, dusty ceramics outlets – probably storage for galleries down on Hollywood Road – and mom-and-pop groceries with barrels of rice and shelves of faded soy sauce bottles.

Since then, the place has been gentrified out of all recognition.  After the Mid-Levels Escalator was built, Western-style restaurants started to open up, originally in search of low rents but increasingly in search of high-rent trendiness labeled ‘Soho’.  They took all the old folks and put ‘em in an old folks museum, and charged all the people a dollar and a half just to see ‘em.  Actually, many of the original residents were forced out after the government ordered them to remove all the illegal extensions that had made their apartments habitable for decades.  They sold to investors who converted the 400-square-foot places into studios and asked young, single financial types HK$25,000 a month for them. A Krispy Kreme Donuts succumbed to negative feng shui, but 7-Elevens are sprouting on every corner.

Walk a hundred yards west, however, and you step back in time.  This is the bit I show visitors, as I did on Saturday: 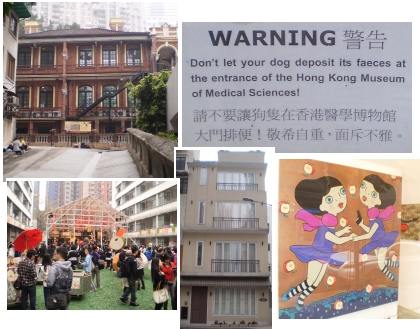 This area was ground zero for Hong Kong’s bubonic plague outbreak in the 1890s, hence the medical facility (where they isolated the bacillus), the nearby Tung Wah hospital and the (still-thriving) coffin shops.  The old police married quarters, where chief executive Donald Tsang was raised, were due to be demolished so property developers could build high-rises full of exclusive-lifestyle rabbit hutches for the young, hip urban elite.  However, development secretary Carrie Lam last year decided to rescue them, along with several other older buildings in Central.  While not everyone likes her plans for these structures, the decision not to let the developers have them is little short of stunning.

Strolling up a bit from the old barracks, we came to Wing Lee Street.  I explained to the visitor that the old row of 1950s tenements recently hit the big time. It has appeared in an award-winning period film called Echoes of the Rainbow, but it is also being consigned to the wrecker by the Urban Renewal Authority – an organization that is about as popular as a government-run eviction agency answering to the property developers would be if such a thing existed.  The dilapidated spot has become a cause.  If we are lucky, I told my guest, we might see some examples of an interesting new phenomenon in the Big Lychee: young people who are into heritage.

I though there would be two or three.  In fact, the crumbling alleyway was full of teenagers and twenty-somethings who had come to photograph and experience the location.  Some of them were also handing out protest leaflets, signing a petition and tying yellow ribbons round railings to protest against the imminent demise of a bit of history they hadn’t known was there.

Could this be the spark that sets off another bout of youthful unrest, like the protests over the old Star Ferry terminal and Queen’s Pier in 2006-07 and the Express Rail Link in January?  This should set alarm bells off for any government official with an ounce of sense. Except, of course, they don’t have any. Do they?

Step forward again, Carrie Lam.  It is unlikely that, as a lifelong Hong Kong bureaucrat, Lam actually sees anything wrong with knocking down old neighbourhoods and letting developers turn them into high-density, airless, polluted, traffic-clogged monstrosities. But she is increasingly tipped as probable chief secretary to chief executive Henry Tang, should such a thing transpire (there are even murmurings about her getting the top job herself, but that’s stretching it). A proven ability to nip adolescent uprisings in the bud could come in handy.  Anyway, quicker than you can say “smart, if opportunistic” she’s in there, saying it might be possible to save all the tenements.

Welcome to Hong Kong, where the government gets pushed around by teenagers with cameras.