Yes, God has provided a quiet day at the office

A major contribution to the decline of intelligent conversation, letter-writing and spiritual contemplation is the emergence of Googleplexing either as a competitive sport or a solitary pastime.  The player chooses two improbable words and Googles them, with the aim of getting as few results as possible, though more than zero.  Thus if we Google ‘dwarfdom’ and ‘aardvark’ we find a disappointingly high seven web pages manage to contain both phrases.  The ideal score of course is one.

Googleplexers frown on the use of whole phrases, as it makes the game unnecessarily complicated and tends to bring in a lot of zero scores.  Try ‘ “Mark14:19-20” “Urban Design Guidelines for Hong Kong” ’, for example, and you will not be amazed to find that no single on-line document features both strings:

The pdf file is missing*, but the cached html version shows that some pious bureaucratic soul decided to start chapter 13 on A Future Roadmap with the story about the loaves and the fishes.  Which brings us incredibly neatly to the fascinating subject of the rise of fundamentalist Christianity among middle and senior levels of Hong Kong’s professional, business and bureaucratic classes – a trend that poses an even greater threat to all that is decent and good than Googleplexing.

Thanks to their networks of schools, the mainstream Catholic and Protestant churches have long recruited among our city’s impressionable and upwardly mobile youth.  Christianity, like other habits of the colonial rulers (drinking cognac, wearing three-piece suits in summer, joining the Jockey Club, etc), also had a social cachet.  The stereotype middle-class, pro-democracy Hongkonger is a Catholic; the classic working-class, pro-Beijing equivalent follows the usual Chinese/Buddhist/Taoist mélange.

I don’t know when the evangelicals started to proselytize here.  I remember them organizing picnics and other activities back in the 1980s for poorer kids who didn’t get out of the housing estates much.  But at some stage in the last 10 or 15 years they seem to have sunk their hooks into the affluent and conservative upper reaches of society.

Property tycoon (and former Enron director) Ronnie Chan is rumoured to prowl the streets after dark looking for wayward youths to rescue for Jesus.  Sun Hung Kai Property’s Kwok brothers built a life-size (though concrete and supposedly educational) Noah’s Ark at their Ma Wan development.  Unlike moderate, mainstream Christianity, Calvinist/Puritan Evangelism stresses blind belief rather than loving one’s fellow man; some of its modern, born-again incarnations suggest that worldly riches are God’s reward for faith, making it the ideal religion for members of property cartels.

Over in government, we have Security Secretary Ambrose Lee pushing the Bible in official press releases; Constitutional Affairs Secretary Stephen Lam and Justice Secretary Wong Yan-lun are believers, as is former Commerce Secretary Fred Ma.  Another scurrilous rumour concerns a small group of the prosperous and well-connected who are starting up their own school, partly as a legal loophole to get around Hong Kong’s ban on home-schooling, to protect their kids from evolution, the Big Bang, plate tectonics and other science that contradicts the Book of Genesis.

Lower down the power structure, they crop up all over the place.  The 24-hour Creation TV (Cable ch15, Now TV ch545) station was endorsed by the then-boss of the government-funded Arts Development Council, one Darwin (but not –ist, presumably) Chen.  Philemon Choi, sitter on a hundred advisory boards, is an inveterate Gospel-pusher, as are hundreds of school principals, social service managers and similar doers of good.  And, of course, countless thousands of ordinary plain folks subscribe to this stuff, as well.  The agenda is anti-indecency, anti-gambling, anti-sex, anti-gay and anti-liberalism generally (though for some reason they don’t share the American evangelist or Catholic outspokenness on abortion).  Liberalism, if you read between the lines, is a code word for aspects of modern Western culture.

At this stage it gets creepy-yet-oh-how-predictable: mainland officials give their Communist, patriotic blessing to this movement.  A fine HK Magazine article sums it up.

One of many ways in which the Holy Spirit moves our officials to do the Lord’s work can be seen through a glance at the list of charities allowed to collect funds on Saturday mornings.  The word ‘evangelical’ crops up quite a lot (though the Evangelical Lutherans are OK – just ordinary decent non-mouth-frothing Protestants with a misleading name).  Breakthough (13.6.09, territory-wide) is Philemon Choi’s youth ministry.  Hope Worldwide (18.7.09, HK Island) fights AIDS with abstinence-and-faithfulness-for-youth projects.  Media Evangelism (19.8.09, Kowloon) is building a Christian media presence – yippee.  Operation Dawn (16.1.10, HK Island) cures drug addicts (Nepalese, who are Hindus, a speciality) through God.  These are mixed in with reputable Third World, elderly, kids’ and other causes, so generous donors who think they are helping the downtrodden and dispossessed might actually be funding the All-China Pentecostal Brightness and Sweetness Suppression of Masturbation and Bikinis Campaign.

For example, we have (13.2.10, HK Island) the Society of Truth and Light – Hong Kong’s very own Christian Taliban, whose achievements include hijacking the jury-type panels that rule on obscenity in the media, inducing the cops to raid a chain of clothes stores over a T-shirt and wetting themselves over media discussion of homosexuality.  These guys are on their case.  We have six weeks to the second Saturday in February to decide what to say or do to these people when they ask for a donation on the streets of Hong Kong Island.  Remember: orange collection bag with a white lighthouse… 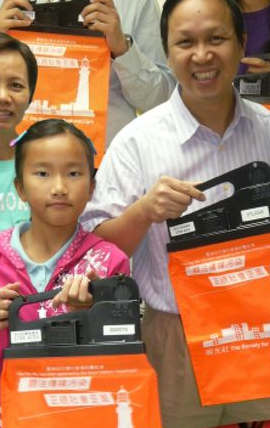 Time for one last Googleplex:

Fred Ma’s wife on encountering the Lord in Singapore (web page can be slow, possibly smitten with righteous wrath).

*Actually available here, but not worth a look

11 Responses to Yes, God has provided a quiet day at the office