Live! Exclusive! From our Soho correspondent

Hundreds of British Mid-Levels residents’ dreams of a traditional Sunday lunch of roast beef, boiled cabbage and Heinz baked beans with lashings of gravy were cruelly dashed this morning when a major conflagration broke out at the Yorkshire Pudding restaurant in Staunton Street, Soho.

Greasy, black, malodorous fumes suddenly spewed into the still-sleepy neighbourhood from the alleyway adjoining Shelley Street shortly after 9.00am.  Staff rushed to alert their colleagues at Staunton Café, owned by the same chain of eateries, leading to a serious delay to an order of a double espresso, as a result of which the customer concerned was tempted to steal the establishment’s copy of the Sunday Post but thought better of it as he had already read it.

Within minutes, a fetching young female constable was on the scene, accompanied by two slightly dull looking male comrades valiantly talking into their radios.  Soon after, a fire engine arrived.  Then another.  Then another. 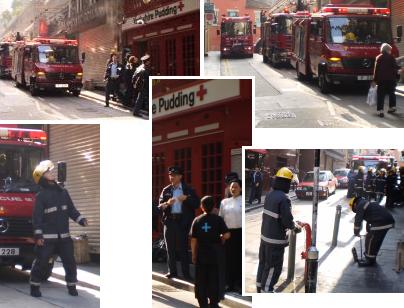 As firemen crowded into the smoky ruins, an ambulance attempted to squeeze into the narrow street and a Cable News camera crew appeared among the dozens of curious and excited onlookers crowded outside Duke’s Burgers, the famed wagyu sandwich purveyors opposite.  At this point, the espresso was finally delivered, and thus one emergency, at least, was over.

3 Responses to Live! Exclusive! From our Soho correspondent