Either Hong Kong is run by idiots, or by people who think the rest of us are idiots.  Today’s South China Morning Post carries another pro-Express Rail Link ‘Sponsored Feature’ paid for frantically with my money by the government that dare not speak its name.  Even by the standards of mendacious, intelligence-insulting horse manure, there is something curiously unconvincing about it. 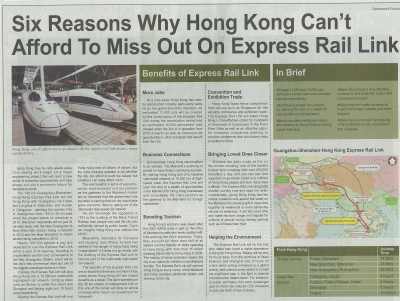 Propaganda comes in various guises.  A North Korean-style slogan like “The workers’ paradise will crush evil America” serves largely to comfort the dictators who order it.  At the other end of the spectrum is genuinely clever misinformation that turns the opposition’s credibility against itself.  During World War Two, the allies broadcast pro-Nazi rants in German in exactly the style of Goebbels’ radio stations, interlaced with nicely unpersuasive assurances that the Reich’s recent military setbacks were nothing to worry about.

An equivalent for officials given the task of selling us a third Kowloon-Shenzhen rail link for HK$50 billion might be to set up a fake middle-class lobby group to fight the project in such a way as to undermine genuine opposition and alienate the public from them.  “We realize,” their full-page ads could declare, “that without the Rail Link a million of so Hong Kong workers will starve to death owing to marginalization, but as the taxpayers expected to pay for it, we say ‘to hell with them’ – we’d rather keep the money.”

The creative geniuses behind today’s pro-Rail Link announcement obviously want to avoid the crudeness of Pyongyang-type screeching but at the same time cannot bring themselves to address the undecided or skeptical adults who are presumably their target audience.  They are probably right to avoid any attempt to justify the outrageous cost of the thing.  But the supposed benefits they cite are questionable, vague or crass.

The caption under the photo of two bullet trains says: “Hong Kong can ill afford not to go ahead with the express rail link project, many experts believe.”  The copy mentions “grave economic risks,” while Transport and Housing Secretary Eva Cheng Yu-wah is quoted as warning that we might be (wait for it) “marginalized.”

Then we get the Six Great Reasons, none of which spell out the slow, lingering death that awaits us if we do not link with the nation’s high-speed rail network via the most expensive means that can be devised:

It will create employment – as digging huge holes under cities tends to (at a cost of HK$2.5 million per job, in fact).  It will enhance unspecified connections to a wealth, no less, of unspecified opportunities, to someone.

It will bring “countless additional visitors,” as if we are not already suffocating under the weight of tourists clogging up the streets.  It will make the Big Lychee a “conference and exhibition option,” as if it is not one already, hence much current clogging-up of streets.  It will make reunions of loved ones longer and happier, which, juxtaposed with the threat of more tourists, actually sounds well worth HK$50 billion.  And then, the inevitable last refuge of a scoundrel these days: it will help the environment.

The reasons are almost deliberately lame, as if the officials concerned know they are going ahead anyway and can’t be bothered to make a realistic case.  But such cynicism requires a certain amount of self-awareness; and if they had that, they would not be overlooking the impact of this project on Hong Kong’s reputation overseas for sound fiscal management and their personal place in the history books.

A credible justification for this project would have to rest on the unspeakable horrors of marginalization.  Give us some details about life in a Big Lychee isolated through lack of a high-speed rail link: skyrocketing unemployment, property and stock market crashes, famine in Yuen Long, mass-suicides in Shatin, columns of ragged widows and orphans pushing carts north, and helpless, cuddly puppy dogs and kittens left roaming the streets, starving and unloved.

But they don’t dare.  This is the terrible fate that mysteriously does not await Guangzhou, even though the network will not reach its urban centre.  It is the nightmare scenario that for some reason did not apply a few years back when the idea was to use the existing, under-used, West Rail line to hook up with the mainland’s 10-hours-to-Beijing system.  It was the doomsday that couldn’t have been further from chief executive Donald Tsang’s mind when he decided the government wasn’t spending nearly enough on infrastructure.  When he essentially set civil servants targets: spend this much or more on concrete and steel, or else.  Find the most expensive option.

Idiots who think the rest of us are idiots – that sounds about right.