The many faces of our number-one think-tank

Anyone in search of 15 definite photographs (plus one probable) of Bauhinia Foundation chairman Anthony Wu can do no better than to pick up the first edition of the think tank’s 16-page newsletter, Bauhinia Perspectives.  Even before you open it, your eyes have no fewer than three images of his chubby and smiling visage upon which to feast.  Foundation Director Lawrence Lee comes in second place with a total of eight appearances. 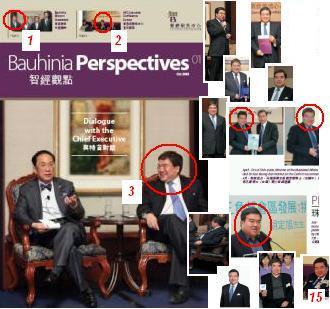 This modest-sized organ has little in the way of absorbing think-tankish content, and is only an averagely interesting example of its genre: the corporate publication designed primarily to ego-massage the people who made the decision to have a corporate publication and who approve every issue.

It does, however, introduce the Friends of Bauhinia and the concept of the Foundation as an organization that should be involved in advocacy.  The FoBs would appear to be a sort of Opus Dei of the Big Lychee establishment: 500 people (almost certainly not from all walks of life) willing to flagellate themselves through focus group-attendance in return for the possibility of meeting someone important in the government.

Although it claims to be apolitical, the BF is tycoon-funded and distinctly friendly with the administration of chief executive Donald Tsang.  It could be seen as the proto-political party of our plutocracy-bureaucrat ruling coalition, or perhaps the extreme-cosmopolitan/bourgeois fringe of the Chinese Communist Party’s united front in Hong Kong.  A glance at the youngish professionals seated in the lush ballroom at the FoB’s Dialogue with Bow-Tie (p.2) suggests a calculated effort to co-opt the sort of people who, not long ago, would have been temped to identify with the pro-democracy camp.  Of course, many of the non-civil servants hired as government assistant secretaries and political assistants to be ‘groomed as political talent’ came via the BF.

In one of my discrete social circles, secondment to the Bauhinia Foundation to help out with research is something of an occupational hazard.  Some resent being dragged away from their office for a couple of months, while others are flattered; by all accounts, the experience is fairly restful.  The BF takes the Asia’s World City thing seriously, so the odd token gweilo gets roped in.

Some projects seem to serve a vaguely conservative, pro-business agenda, examining ways to limit social spending, for example.  Others revisit the Big Lychee’s ultimate, politically correct piece of sublime mysticism and nonsense – pan-Pearl River Delta integration, partnership, metropolis, blah-blah, blather, blather.  One project, which has been in the pipeline for ages and ages now (hasn’t it?) is looking into the possibility of shaking up the fascistic rules that ban people from doing anything fun in public parks.  Might even be useful, if they ever finish it.