The biggest per-capita consumption of oranges, the highest density of top-range Mercedes on the streets, and the most ever paid at auction for a truffle: Hong Kong’s claims to global greatness go on and on.  And, as the lead headline in Saturday’s South China Morning Post announced, our visionary leaders are now working on a plan that could give the Big Lychee one of the most impressive records imaginable.

While the mainland spent a pathetic US$24.5 million per kilometre on its Beijing-Shanghai high-speed train route, Taiwan a miserly US$44.7 million on the Taipei-Kaohsiung line, and the UK and France a modest US$84 million on the cross-channel tunnel, Hong Kong officials have, after much hard work and ingenuity, found a way to pay a truly breathtaking US$190 million for our section of the planned Kowloon-Guangzhou link.  That’s per kilometre.

In Hong Kong dollars, that’s 1.5 billion a click.  HK$457,000 a foot.  HK$38,000 an inch.  Even reverting to greenbacks – US$4,780 an inch – it sounds impressive.  Only when we cost it per micron*, at HK$1.50 a go, does it look disappointingly humble (though there is talk of the final bill overshooting this estimate, so who knows?)  And this is all without cheating and making the tracks out of diamond-encrusted solid gold.

How did they manage it?  It involved some serious thinking out of the box.  China is building a national high-speed rail network, and Hong Kong obviously wants to be linked to it at its Guangzhou hub.  But our officials faced a major problem: we already have a rail line to old Canton, which has worked fine since 1909.  We don’t need to spend a penny.

So any hope of acquiring the world’s most expensive train service lies in shatters.

Not so fast.  Fortunately, our policymakers have found that if we insist on linking to the national ultra-fast network with a short high-speed service of our own, we will have no choice but to build an entire, brand-new line, as the existing one can’t handle the wider bullet trains.  And the news gets better: if we don’t use the existing terminus, but build a new one where no-one ever goes in West Kowloon, site of the future cultural hub, it will have to go underground, where it costs very, very large amounts of money to do engineering work.  Best of all, the space between West Kowloon and the border is full of mountains, towns, highways and nature reserves, so the track too will have to be buried expensively deep down. 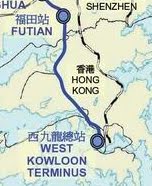 It doesn’t stop there.  The cost of construction materials is rising, so the HK$1.5 billion-per-kilometre figure could increase, which would consolidate Hong Kong’s proud grip on this magnificent global record.  And a massive car park in the subterranean terminal presumably means building yet more roads with money and on land that would otherwise be frittered away on something silly.

Then there’s the exquisite icing on the cake: the high-speed choo-choo hub in Guangzhou will actually be in a suburb south of the city, so the new service won’t even take Hongkongers into the centre of the provincial capital.  Those that want to go there – and almost 90% will be headed no farther than that – will have to grab the local mass-transit to complete their journey.  A HK$1.5 billion-a-kilometre, high-speed link that actually adds to the travel time!  Beat that.

Wait!  There’s more!  To cap it all, the tickets will have to be more expensive than the current ones, assuming somebody somewhere wants even a shred of a return on investment.

Inevitably, a small number of naysayers and cynics are mocking the genius of this scheme.  The dark muttering of words like ‘unnecessary’, ‘wasteful’, ‘insane’ and ‘cretinous’ is met by the sound of slamming hatches and rising drawbridges, as our dedicated civil service prepares for battle with public opinion – the enemy that must be defeated at all costs if Hong Kong is to create a glorious new wonder of the transport infrastructure cost-benefit analysis world.

But the doubters are doomed.  For linking to China’s high-speed rail network at the border with an existing, paid-for, slowish track would make the Big Lychee different from the rest of the motherland.  It would set us apart.  We would be left out.  Left behind.  Isolated.  Not integrating.  Implicitly disloyal, splittist and opposing Communist Party rule.  If avoiding such unpatriotic symbolism isn’t worth a mere HK$9,000 per man, woman and child in the city, what is?

And the extra half-hour it will take to get to downtown Guangzhou?  Time to eat another couple of oranges.