Outrage as city doesn’t come to halt over dog

As is often the case as the end of summer starts to approach, the mentally diseased take over.

Frenzied mouth-frothing erupts in Hong Kong after a stray dog is fatally hit by a train. The facts of the case are: stray dog got on tracks near MTR station; staff halted trains for five minutes while trying in vain to get the animal; operations resumed, and the creature was later found dead.

Apparently, the correct procedure is as follows:

Grown men and women, plus extraordinarily opportunistic People Power activists, assemble at the station to burn incense and pray for the departed. A hundred thousand or so sign an on-line petition demanding whatever people like this demand – a universal pension for dogs or something. And then, just as you think it can’t get any more grotesque, one protester compares the situation to the death a few years ago in the Mainland of a little girl who was run over by a vehicle and ignored by passers-by in the street. I didn’t use the phrase ‘mentally diseased’ lightly.

Hong Kong is hardly the only place in the world where people are becoming unhinged and incapable of fully distinguishing other species from humans. In the United States, admirers of cute fluffiness have recently been horrified to learn that rabbits can be food. British singer Morrissey thinks meat-eating is on a par with paedophilia. Here in the Big Lychee, middle-age – possibly childless – women dress poodles up in lace and push them round in buggies. It is not normal or healthy.

At least there seem to be limits. I haven’t seen the dog-mourners setting up shrines for the thousands of furry rodents poisoned every year by the Food and Environmental Hygiene Department. Rats, presumably, aren’t big enough, aren’t fluffy enough, don’t look at us with big round eyes enough, don’t sometimes appear to be grinning enough. And at least the child-like mawkishness over furry animals is, however misplaced, genuine – and not the sort of manipulative, cunning, cultish yuck with which I declare the weekend open: an invitation to fawn over Deng Xiaoping’s wheelchair… 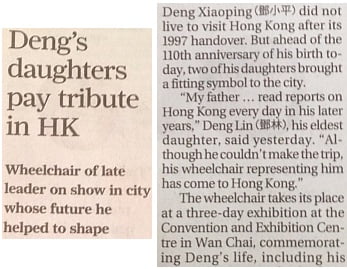