‘If Occupy goes ahead, you’ll have to live in tiny homes’

Scare stories fill the pages of the South China Morning Post today. They would be more convincing if they weren’t paid-for. The anti-Occupy Central petition

campaign announces 662 locations at which you can protest against the threatened pro-democracy civil disobedience action. Mostly, the sidewalk stalls are outside MTR stations and similar places. Bigger indoor ones are at the Kowloon Federation of Associations, the New Territories Association of Societies and similar joyless, United Front-sounding establishments. The reports are that people are getting HK$10,000 a month for helping out with this. Not a lot per-person, but on this scale it adds up to some half-way serious money, which confirms that someone is obsessed with matching Occupy Central’s referendum to an almost-unhealthy degree. Among other evidence: reports of Mainland students in Hong Kong being pressured to sign.

Buying a more budget-conscious quarter-page, as you would expect, various chambers and business lobbies obediently repeat the desperate arguments about the horrors that await us should the extremist anarchist lunatics go ahead with their pro-democracy sit-in. They claim that the business district will suffer gridlock, when common sense suggests it will be the first time in years the streets are free of traffic jams. And they warn that there will be fewer tourists clogging the place up, which can only bolster our feeling that Occupy Central sounds like a better and better idea all the time.

Even real, live non-paid-for scare stories fail to shock today. McDonalds in Hong Kong takes chicken nuggets off its menus as we learn that it and Burger King, KFC and other chains have been selling food that might be disgusting and unhealthy. This is ‘news’? And the suspect meat came from a Mainland firm. And this is also ‘news’? ‘Fast-food outlets and Mainland companies produce items fit for human consumption’ – that would be news.

Among the business groups bleating about Occupy in the SCMP ad is the HK Real Estate Developers Association – a bunch of grasping scumbags that would put Shanghai Husi meat packers and Yum! Brands to shame. By some sort of cosmic coincidence, the rest of that page happens to be taken up by an in-depth article on Cheung Kong’s Mont Vert development in Tai Po, home of the famous 177-sq-ft apartments buyers aren’t allowed to see. By ‘in-depth’, I mean taking most of the facts at face value and largely avoiding (or comprehending) the rottenness of the whole land and housing system. Much of the story revolves around whether the developer is breaking the law by not allowing viewings. The overriding impression is of the government body concerned, the Sales of First-Hand Residential Properties Agency, apparently petrified of the attention, doing nothing and saying nothing.

I declare the weekend open with Luxury Apartment of the Month: 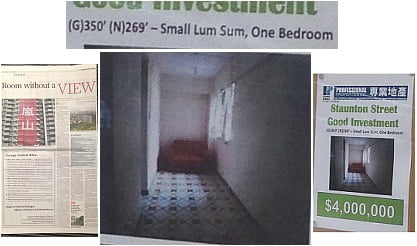 It has a grand 269 square feet of actual space, which includes ‘One Bedroom’ (which is one more than you would expect, I suppose). You can’t get mortgages for old places like this in Soho, so the selling point is that it’s yours for a mere HK$4 million in cash. It looks like a Detroit crack den, or some last-resort hovel for a family in Gaza – or the setting of some sick slasher film. For a few thousand bucks, the seller could have given it a lick of paint and switched a light on – but they haven’t even bothered to do that. Mont Vert suddenly makes sense: homes are so tiny and miserable, it’s an act of mercy not to let you look at them.