Parking in the living room with Cambodia’s middle class (1) 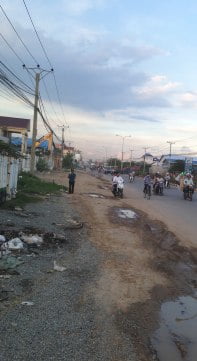 This is an inner suburb of Phnom Penh, off Street 2004, near the airport. Some of the surrounding neighbourhoods have giant potholes, half-naked kids darting between piles of garbage, noisy diesel tuk-tuks and roadside stall-holders selling fruit and vegetables. Our five-street grid is a quieter and more orderly little oasis of Cambodian rising middle-class prosperity.

The homes are rowed shophouses, with one large downstairs space open to the street serving as both a business area – sometimes a small store – and a living room, with TV and shrine with electric candles glowing in the back. As it gets dark, everyone drives their shiny Hyundai or Toyota into it. Then they pull the shutter down and seal it and the backdoor with multiple padlocks.

In the kitchen at the back are green bananas, jars of home-pickled lemons and drying mangosteen rind (good for stomach problems). My hosts re-heat the leftovers from our sour soup and chicken curry dinner before fixing a lid on the wok, because there’s no refrigerator. “That will be next,” they say. They already have a washing machine. A fridge is problematic, because of power cuts. There’s no air-conditioning either – just fans. The lower two floors are decorated and furnished, but the two upper levels, including a rooftop verandah, are still bare concrete. 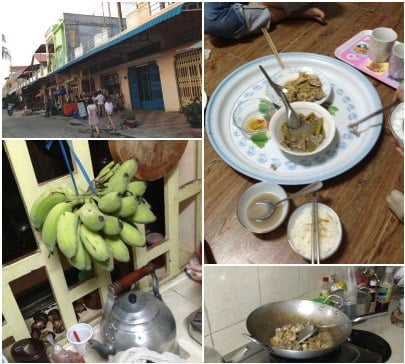 Many of these people grew up in wooden houses in villages where you were well-off to have an ox cart, so they are conscious of coming up in the world. Typically, they run or work for a trading business or do such white-collar jobs as quality assurance, accounting or teaching. No-one has a maid, because “you can’t trust strangers,” though some families have a poorer cousin – or parents – from the countryside living in to help with chores.

Everyone speaks Khmer; some of the older residents in particular can speak some Chinese, usually Chiuchow. They do not seem to think of themselves as Chinese (many are mixed), but, in the familiar Southeast Asian pattern, tuk-tuk drivers, market stall holders and people from poorer streets nearby are noticeably darker-skinned than 90% of the residents here.

We went for a day out to a sort of resort about an hour out of the city. For a few dollars, you get an 8-by-8-ft space on a palm mat in a long, open-sided, thatched-roof hut on stilts overlooking a pond, plus some Coke, ice and hammocks. Then you go to the cooked-food market to get your meal (in our case, sticky rice with jackfruit wrapped in leaves, snails, grilled fresh-water fish, rice, beansprouts with chili, custard apples and sauces). Most of the other mats were occupied by groups of young city people enjoying time away from the parents. It’s hot, crowded and noisy, and the stagnant water under the bamboo floor smells a bit, but this is the up-and-coming Cambodian bourgeois good time. The sort of thing you can afford when you’re doing OK on a few hundred US dollars a month and are deciding whether to finish the verandah next or get a fridge.

wannabe narcissist is getting his 15 minutes as global heartthrob martyr for his betrayal of the Western world, liberty and apple pie. If this were a TV show, the casting director would at this point introduce a redhead girlfriend with pink lipstick and pink tutu. Adoring supporters laud him for sacrificing himself for the cause of personal privacy on, of all places, Facebook and Twitter. Officious, grim US commentators call for extradition and life behind bars. All this freaking out because no-one stopped to imagine that the intelligence industry would do basic passive traffic analysis – nothing personal, they’re not watching you, yes it’s a waste of taxpayers’ money – on social media, just as we all know they do on email and mobile phones. The soap opera will, no doubt, have an entertaining denouement in due course, and who can failed to be touched by Mr Snowden’s charming faith in the Big Lychee? Life is simpler in Phnom Penh. 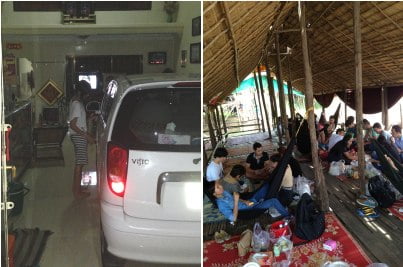