The Hang Seng Index opens an amazing 20% up at 27,500. OK, so it doesn’t (it actually starts the day down a tiny fraction). But it would have done if the South China Morning Post’s front page were to be believed. To read the SCMP, you would get the impression that the Chinese government has decided to go right ahead and make the country’s currency fully convertible, and the wall of money we were promised six years ago is about to come crashing into town.

Look for details, however, and all you get is unattributed vagueness in the passive voice, like “It had been speculated earlier that full convertibility would come by 2015.” Or, as the Standard puts it, “It is believed that Yuan capital account convertibility could be achieved in 2015 at the earliest.” For a clearer idea of what is going on, we turn to Reuters (few other channels are even mentioning this semi-story about another outbreak of reform waffle), which tells us that China’s cabinet has called for plans to ‘help achieve’ convertibility at some stage. 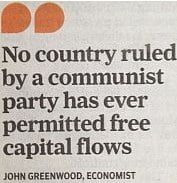 In other words, the only body in the country that can authorize convertibility is openly saying that it still hasn’t got around to planning such a move. Which is hardly surprising. Just last week, the SCMP quoted economist and HK$ peg designer John Greenwood as summing it up nicely: “No country ruled by a communist party has ever permitted free capital flows.”

Karl Marx thought communism would follow what he saw as late-stage capitalism, and would therefore happen first in Britain. In fact, communist regimes took over in societies that had recently been feudal. In the case of China, that meant a Leninist culture of absolute, tight-gripped control was grafted onto an old Confucian imperial one, with a bit of KMT warlordism thrown in. The Chinese Communist Party cannot permit free capital flows for the same reason it cannot permit a free press, a free judiciary, a free legislative branch, free banks, free churches, free universities or free civic and charitable movements: it must control, control, control.

A freely convertible Yuan would require that the Communist Party allow free global markets to decide either the exchange rate or (if they kept the currency pegged) the country’s interest rates. For ‘free global markets’ read ‘evil foreigners who are forever plotting the overthrow of the regime in Beijing in order to keep China down’.

But there is more than just paranoia going on here. By denying the masses the right to move money into another currency or country, the Chinese government forces them to put their savings into local banks. (Alternatives are dismal local stock markets, inflated property or informal and risky savings-and-loans sharks.) The banks are, needless to say, state-owned and pay depositors lousy interest. They can therefore lend to other state-owned companies at very low rates, enabling those corporations to compete unfairly with private or foreign rivals, thus accumulating extra market share and assets. The bosses of these companies are family members and buddies of the country’s leaders, and they stuff their pockets with much of the proceeds, which then leaks out into Macau casinos, Hong Kong money-launderers and Vancouver real estate.

So a non-convertible currency forces the ordinary population to transfer part of the wealth they earn to the modern-day aristocracy. Same old feudalism, in other words. (With Chinese characteristics!) And if you were a member of the Politburo, you wouldn’t have any plans to change it either.