Much frothing of mouths, as Hong Kong learns that Chief Executive CY Leung notified the Hong Kong and Macau Affairs Office in Beijing last October just before announcing a 15% ‘buyers stamp duty’ on non-residents buying property. Even pro-Beijing lawmaker Tam Yiu-chung seems to have found it noteworthy that HKMAO boss Wang Guangya said there wasn’t enough time to bounce it off the central government but to go ahead anyway.

The idea that this represents a breach of confidentiality of Executive Council proceedings is a bit of a stretch given the supremely hierarchical nature of China’s governing structure; things can leak downwards but not upwards. And as for the possibility of Mainland officials abusing the insider information and rushing out to buy a Hong Kong apartment or two, we can only declare ourselves shocked – shocked! – that anyone could imagine such a thing.

On the one hand, the exchange sounds rather like one between a company’s CEO and its chairman, with the latter saying, yes, strictly speaking we should’ve notified the board – leave it to me. Which doesn’t say a lot for the ‘two systems’ bit of the ‘one country, two systems’ formula. On the other hand, this particular policy initiative was aimed squarely at Mainlanders, and, as with limits on baby milk formula exports, it has gone down badly among some members of the public up there, fed up with spoilt, bratty Hong Kong.

Not at all surprisingly, witless reporters compete to ask Cheung Kong boss Li Ka-shing the most inane questions at the conglomerate’s earnings results press conference. How would the property tycoon and asset trader define ‘love of country’ – a quality Beijing officials say Hong Kong’s CE must have? Among other things, the great man says ‘speaking the truth’. As in not saying an 886-square-foot apartment is actually only 664 sq ft? Or not portraying a high-rise cluster of shoeboxes in noisome Tseung Kwan O as occupying idyllic verdant wilderness? I can only agree. 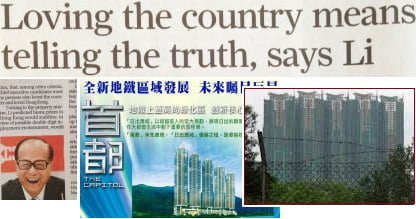 But wait! Good news: one-country-two-systems is alive and well. China says its exports to Hong Kong rose 35.6% in the year to February. Hong Kong says its imports from the Mainland dropped 18%. One-country, eat your heart out (leaving aside the fact that ‘one country’ shouldn’t be exporting to/importing from itself in the first place). Even better news, for both Mainland export scamsters and Hong Kong taxpayers: no 61-year-old public housing tenant is involved here, so there will be no need to sentence anyone to 10 years in prison (@ approx. HK$0.5mn p.a.) for this.

Finally, Hong Kong’s biggest teachers’ union is producing Liberal Studies materials on the barely nascent Occupy Central pro-democracy campaign. Is this brilliant or what? You can’t get National Education into schools, but you can teach kids how to bring the central business district to a halt through non-violent civil disobedience. I almost feel sorry for the pro-Communist brainwashing brigade sometimes.

Click to hear ‘Patriot’s Lullaby” by Joe Byrd and the Field Hippies!