On the top floor of S-Meg Tower, in the throbbing central business district of Asia’s leading international financial hub, the morning begins in the Company Gwailo’s lair with a slow sip of oolong and a relaxing moment admiring the majestic scene beyond the window, where the Hong Kong sun is piercing the swirling suspended particulates and bathing the harbour in a vibrant nitrous oxide-orange.

Down below in the street, millions of anxious citizens excitedly chatter about the riveting events going on around them. Legislators support higher pay for legislators, some tell one another, swooning in shock at the very idea. Others rush to be the first in line on hearing that technically not-yet-elected Chief Executive-elect Henry Tang vows to release a ‘written version of things said on various occasions’. Up here, in the headquarters of this dynamic conglomerate, all is calm.

Then, a kerfuffle at the door. Speaking of junior tycoons… Ms Fang the Hunter-Killer Secretary leads Number-One Son in by the hand and, with a look of disdain, silently abandons him before my desk. Our visionary Chairman and Chief Executive’s offspring, officially a senior manager in his own right, is clutching some papers. After the usual stuttering and blinking, he blurts out something about an appraisal form that was due back with the Civil Service Bureau yesterday.

The Big Boss, as a fully paid-up Friend of Donald all these years, had no hesitation in agreeing when the government’s Office for the Grooming of Future Toadies invited his heir to join the ranks of cronies appointed to the myriad public bodies that so expertly convey the mood of the people to Hong Kong’s leaders. With his goofy grin, staring eyes and compulsive nodding, the scion of the S-Meg empire makes a perfect companion to the Bunny Chans, the tame academics, the Bronze Bauhinia Star-gazers and the token and pliable ethnic minorities flattered to become fourth-class, useful-idiot ‘insiders’.

After a narrow brush with the Agricultural Products Scholarship Fund Advisory Committee (and you are wrong – it does exist), he is now sitting on the Tourism Commission’s Visitor Development Projects Review Board. Under the watchful eye of some Mother Hen civil servant and underlings, he and his fellow-members see glowing reports on mad schemes to increase the swarms of grasshopper-like tourists passing through our fair city. The way it works is simple. Bureaucrats use their creativity and imagination to devise the Avenue of Stars Firework and Noodles Promotional Fun Day, the parades of singing kids dressed as pandas, the adorable Jackie Chan videos and the Authentic Themed Old Hong Kong Shopping Experience where they tore down the street market. Then bureaucrats write wondrous descriptions of how these events are each attracting an extra 10 million visitors a year. The Board reads through the executive summaries and votes its unanimous approval that taxpayers’ money is being exquisitely used and the bureaucrats are geniuses.

It has nothing to do with me. Or so I thought.

Number-One Son waves the appraisal form at me. “It… it’s about the woman who runs – I mean assists – the Board,” he announces. “I… I have to fill in boxes with letters. ’A’ for ‘More than meets requirements’ down to ‘E’ for ‘Falls short of requirements’.” He blinks some more, while waiting to be told what to do.

The boy blinks some more. “But… but I have to write statements in some boxes. About her.” He stands with his mouth slightly open, presumably in disbelief – indeed, blind terror – at the enormity of the intellectual challenge facing him. “Miss Ip,” he adds.

He suddenly has at least a shred of my attention.

“Tell you what,” I reply in my most conciliatory tone, “leave this with me. I’ll fill it in and get Ms Fang to send it off. You have to be very careful what you write on this. It could, um, have repercussions for her career.” 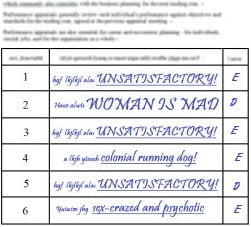 10 Responses to Update from Hemlock