“I shall now turn to the subject of our six pillar industries in which we have a clear competitive advantage, and therefore the opportunity to develop…” A moment’s silence passes before Sir Bow-Tie utters the word “hubs,” prompting groans of despair from the remaining onlookers. As he sips from a glass of water, the last holdouts escape.

“Three more large expanses of concrete each with a big bright gold object in the middle to attract more tourists; five new six-lane freeways running from the boundary into the urban areas to attract more container trucks; seven huge new waterfront museums and cultural centres with no windows to attract more tourists…” Public, press, lawmakers and even one or two government ministers have been visibly edging towards the exits for the last half-hour. Many are quietly slipping out..

Drag myself back to see that Sir Bow-Tie is approaching the halfway point in his address. “I am very pleased to announce an exciting new series of essential infrastructure projects: 17 more bridges and land crossings to Shenzhen to facilitate the inflow of container trucks and busloads of tourists.” People are nodding off.

A fight has broken out between legislators over whether the Disadvantaged Children’s Footwear Subsidy should be set at HK$1,000 or HK$1,100 per school term. Weary onlookers start to drift out.

A HK$8.88 million Illegal Rooftop Removal Subsidy to compensate owners of illicit extra floors on New Territories villas. An annual voucher for HK$500 for every man, woman and child in Hong Kong, good for all purchases in Park N Shop, Fortress and Watsons Your Personal Store. “Number 33,” Donald intones. “One month’s paid time off work every five years for all childless employees, because it’s not fair that they don’t get maternity/paternity leave.” He flashes another self-satisfied smirk.

Everyone is drifting back from coffee over at Admiralty 7-Eleven or in the legislators’ canteen. Despite having an empty house in front of him, Donald has pressed on and is now halfway through his list of 82 measures to close the wealth gap and make Hong Kong into a harmonious society. They stream out faster than I can write them. ‘Carrot Coupons’ for the elderly to buy nutritious vegetables to help them see in the dark. Dependent Domestic Animal Allowance for salaries tax payers’ first five dogs or cats.

But he adds that there are snags. “If we let people have homes at prices they can afford,” Sir Bow-Tie declares, “it will be unfair to various sectors who make a living from selling concrete at HK$8,000 per 12-inch square. Also, it will make people who bought homes at that sort of price feel bad about spending the next 20 years diverting half their income to the bank while the more recent buyers can afford to send their kids to decent schools, so they will probably throw themselves out of the window. On top of that, the community has not achieved a consensus on the way forward.” He looks up and gives us that cheeky, boyish grin.

Woops. Seems I fell asleep there. Sir Bow-Tie is announcing his plan to make tiny apartments available to the 50% of the population who don’t qualify for public housing but don’t earn enough to repay the current level of mortgage within their lifetime. “Since the raw materials and labour needed to construct a concrete box can’t cost more than a couple of hundred grand,” he announces, “and land is so plentiful we can give it away to Disney, Richard Li’s Cyberport or a cruise terminal, there frankly shouldn’t be a problem.” One way of looking at it.

The great man himself strides briskly up to the lectern. I pull the woman next to me down as she starts to rise. It’s not a courtroom.

A security guard is giving the specially adapted 4ft 8in lectern a quick check. And the first senior officials are strolling out into their special Senior Officials Seating Only zone, with new Chief Secretary Stephen Lam leading the way, radiating extreme, almost alarming smarminess.

The Standard reports that Donald will officially declare Hong Kong to be a part of Scandinavia, introducing paternity leave, food stamps for the poor, subsidized travel for the aged regardless of means, a bizarre care subsidy and many other benefits Western countries a generation ahead of us demographically are currently having to cut in order to avoid bankruptcy. According to one social worker, “the care subsidy will put the elderly in a dilemma: it’s not enough to hire a foreign domestic helper who can take care of them 24 hours a day, and only enough to hire a local domestic helper for an hour a day.” Maybe if they chuck the money down the toilet they’ll feel better.

As the first legislators drift in and position themselves strategically with their bananas, I take a quick look at today’s mail. Further to last week’s approach by a film producer floozy looking for a location in Perpetual Opulence Mansions, residents now receive a letter. The action comedy, it says, will star Donnie Yen and Eva Wong, and the former would play a detective who visits my apartment in search of a clue (I’ve lived there for years, and still don’t have one – but anyway…). The company also implores me to support the Hong Kong film industry – in other words, they won’t pay any rent. Presumably, the brief presence of Donnie will boost the property’s market value massively… 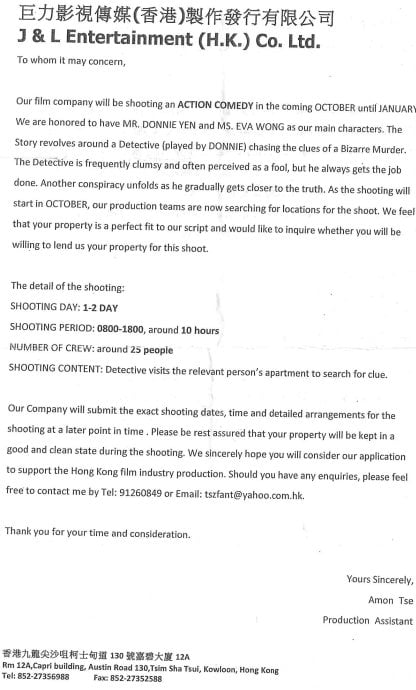 A lot of IKEA wrapping still strewn around, I notice. Funny burning smell, as well.

The press and public galleries are already filling up here in the brand new Legislative Council chamber in the heart of the Sir Bow-Tie Executive-Led Government Palace Complex in beautiful downtown Admiralty.

Here to do a live report on the Chief Executive’s exciting policy address. This is for the seven people in Hong Kong who will not be able to catch Donald Tsang giving his momentous final State of the Ex-Colony speech on 73 TV channels, 25 radio stations, 10 live webcam feeds and by-the-minute written updates delivered to remote mountainous regions by yak.