Plus, of course, we’re lazy

For a maid who hasn’t been attacked by Dominique Strauss-Kahn, Evangeline Banao Vallejos is quite a star, with coverage in the New York Times, Washington Post, Wall Street Journal, the Telegraph and all the rest. The world is, for some reason, watching to see whether Hong Kong grants overseas domestic helpers permanent residency.

The angle is that maids get an unfair deal, but the underlying theme is that Hong Kong must be a rather good place to live in. It is hard to imagine Filipino migrant workers begging for right of abode in Saudi Arabia, and it is unlikely that a claim of this sort could or would get a serious hearing in the courts of most other jurisdictions in Asia.

One question the international coverage doesn’t address is why Southeast Asian women do so much of the middle class’s cleaning, picking up and child-rearing that they account for 7% of the city’s workforce. In America and Europe, third-world domestic help is for the genuinely rich; here, leaving single-person households aside, around one in five families has a live-in maid (more than have cars).

As everyone points out, the amahs ‘free up’ Hong Kong women to go out to work and thus enable a bigger, better, more prosperous, booming economy. But what happens to the net extra wealth created? Many of the families point out that they must have a double income because life is so expensive. If we were in a nasty mood and wanted to pick on our favourite titans of commerce again, we could make a case that foreign domestic helpers, and the liberal regime that allows any family that can afford it to hire one, form just another component of the Hong Kong Mega-Scam. Without working women augmenting household incomes, the property tycoons would be forced to cut the profit margins on their apartments. (Not a new debate: are rising house prices a cause or effect of a higher female labour participation rate?)

The Wall Street Journal story we’d like to see: Hongkongers hire Southeast Asians to wash their dishes and kids so they have a fighting chance of repaying the 20-year mortgage on their Li Ka-shing shoebox. 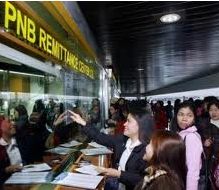 12 Responses to Plus, of course, we’re lazy