On the top floor of S-Meg Tower, in the teeming heart of Asia’s leading international financial centre, the Big Boss surveys his senior management team around the conference room table. Before the morning meeting comes to an end, our visionary Chairman and Chief Executive has one more thing to say.

“You, you, you, you, you and you,” he announces, jabbing his finger at innocent victims trying hard not to be noticed, “and you, and you… and you. And you. I need you with me in Guangzhou for the signing ceremony. I’ll see you up there.” He rises and strides out of the room, thrusting his insatiable digit at a few more unfortunates along the way.

Everyone bar one spotty head accountant and a heavily pregnant company secretary must, with no advance warning, drop everything and go up to the ancient capital of the Pearl River Delta for the day to give face to the slick – and some – bosses of Shiti Enterprises to inaugurate our new joint venture. The three Stanleys in the mailroom are swiftly dispatched to Grand Splendour Villas, Joy Gardens and San Francisco Court respectively to retrieve high-ranking executives’ home return permits. Loyal and cheerful domestic helpers and one or two shorter-tempered spouses dash from lowlier residences clutching others’ travel documents – including one Filipino Elf, who speeds down the hill from Perpetual Opulence Mansions on her hi-tech, non-street-legal scooter carrying the company gwailo’s passport.

She screeches to a halt alongside one of three double-parked, vast, shiny black people-carriers with cross-border licence plates and hands it to me through the slightly lowered tinted window and lace curtains. The driver cranks up a Mandarin pop singer-who-isn’t-Faye-Wong on the sound system to put us in the mood, and off we go. My plans to frame the rather fetching photo in today’s press of US Secretary of State Hilary Clinton calming down after what would appear to have been quite a vigorous romp in the hay with Chinese President Hu Jintao will have to wait until tomorrow. 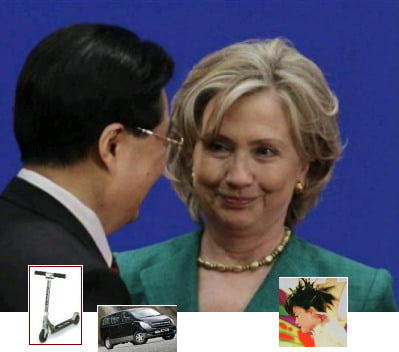