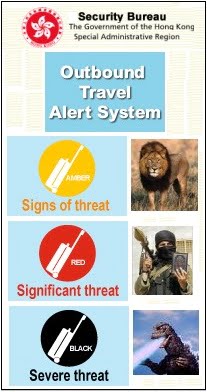 The Hong Kong government upgrades the travel alert for Thailand to black – the point at which certain insurance and corporate HR policies allow for people to be evacuated – and sends citizens visiting the kingdom panicky SMS messages as the Land of Smiles lurches closer to what looks unmistakably like class war.

One rumour currently doing the rounds among Bangkok’s rulers and their elite and middle class supporters, is that ousted Prime Minister Thaksin Shinawatra is on the verge of death in Dubai from prostate cancer. Establishment types take comfort from the idea because, according to their interpretation of events, the former leader personally bankrolls the red-shirt protestors demanding the restoration of democracy. If Thaksin weren’t paying them, the theory goes, the rabble would return to their farms and get back to happily growing rice for a subsistence income like they did in the old days before the crooked populist got himself elected by bribing them with cheap healthcare and loans. (The chattering classes have even ascertained the amounts being handed out to demonstrators: so many baht per day for those at the back of crowds, and several times more for those facing soldiers on the front line. Another rumour warns that certain major Thai companies are also now financing the mob in anticipation of red shirts coming to power.)

Back in the Big Lychee, the South China Morning Post pulls off what is, by its standards, a major coup of investigative journalism and calculates that directors of the city’s six big property developers now occupy 54 seats on official advisory bodies such as the Airport, Hospital and West Kowloon Authorities, compared with 16 in 1998. Yet more confirmation, as if it were needed, of the growing concentration of political and economic power in the hands of a few family-run conglomerates, presumably with the blessing of the Chinese Communist Party to which our bureaucrat-leaders ultimately report. And a Chinese University poll ruffles feathers by finding that the percentage of people agreeing that the Hong Kong government will respond only to radical action has risen from 21.4% in 2008 to 25.9% today.

That statistic has obviously hit a raw nerve, since pro-establishment voices are clamouring to assure us that it means little or nothing. The Standard’s fictitious Mary Ma dismisses the survey as “a bunch of figures,” while the government’s own pollster, Lau Siu-kai of the pitiful Central Policy Unit, tells us that although the “government and public urgently need to conduct extensive discussions on certain major social issues,” (which he doesn’t specify) the public “will surely censure any ‘riotous’ acts.”

5 Responses to It can’t happen here