“The people have lost the confidence of the government; the government has decided to dissolve the people, and to appoint another one.”

China’s leaders have lost trust in Hong Kong.  So says Executive Council member Cheng Yiu-tong.  I was always led to believe that a government that cannot trust its own people is, by definition, unfit to govern.  But obviously I am out of touch.  It seems the Big Lychee’s population is not worthy of its rulers.  Maybe they should return us to the previous owner.

Self-appointed messengers for Beijing are like people who claim to know what God thinks: we can ignore them, mock them, feign interest out of politeness or nervousness, or pay attention just in case the supreme power concerned really is speaking to us.  Cheng certainly wishes that we had not been listening; like several others who strut around conveying the Politburo’s innermost thoughts to us mere mortals, he has backtracked, and will probably be taking sleeping pills for the next few weeks while getting over the trauma of being caught putting words into the emperor’s mouth.

Also as a result of the fracas outside the central government liaison office on Sunday, Oracle Cheng revealed, we might be given an “even more Beijing-friendly” chief executive.  This is an interesting comment. First, we have to wonder: “even more Beijing-friendly” than what?  Donald?  Henry?  CY?  Second, he is clearly implying that Beijing-friendliness is, to Hong Kong people, some sort of a threat, maybe even a form of punishment.  That is not the official line, nor, given that President Hu and Premier Wen outperform our local leaders in public opinion polls with ease, is it even particularly true.

On a brighter note, the Standard’s obsequious gossip column passes along the mind-numbingly predictable word that Lan Kwai Fong landlord Allan “even more Beijing-friendly” Zeman is in line to become chairman of the Hong Kong Tourism Board.

If someone tried to give me a job currently occupied by former Liberal Party boss James Tien, I would be tempted to hit them, or at least strike them off my Christmas card list with maximum prejudice.  Could there be any greater insult?  But Zeman will no doubt regard it as a great honour.  (He might even find something useful for the organization to do – for example, use it as a storage place for his bars’ non-perishable supplies, so Central doesn’t get clogged up so much with delivery trucks bringing in tons of beer, Perrier and peanuts all day.) 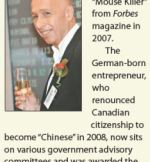 Anyway, for those who can tear their gaze away from the great entrepreneur’s leering visage, the eye-catching thing about the Standard’s remarks on the ex-Canadian is the use of inverted commas around his citizenship, as in ‘he became “Chinese” in 2008’.  His passport may say Zhonghua Renmin Gongheguo on the front, but obviously he can’t really be one of us – the Standard/Sing Tao writer knows – because he’s white, and the whole thing’s just a sort of funny novelty, like dressing a chimpanzee up in a T-shirt and shorts.  And they’re shoe-shining him.