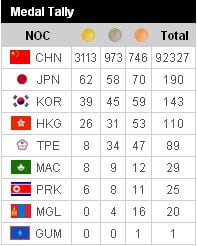 The final results of the exciting East Asian Games are in.  As expected, Hong Kong, China performed abysmally, while Chinese Taipei, China was downright mediocre, and Macau, China a disaster except at fan-tan and blackjack.  In fact, People’s Republic of, China reaped virtually every medal on offer, leaving only a few meager crumbs for the junior members of the Middle Kingdom and the Outer Mongolians, barbarian Koreans and unrepentant militarist devil-dwarf-dogs responsible for the Rape of Nanking.

All agree that the biggest and most miserable failures of the competition were the team from Guam – initially welcomed as ‘plucky little Guam’, but within days universally derided as ‘ridiculous and pathetic embarrassment little Guam’, unworthy to be a member of the happy East Asian family of nations, divided nations, city-states and breakaway provinces, and henceforth to be banished to an obscure spot 1,700 miles out in the Pacific Ocean.

The Guamian team consisted of a swarthy, tubby guy in a loincloth with tattooed face and buttocks, and a petite, dusky woman clad in coconut husks who was – according to conflicting reports – his trainer, dance partner or lunch.  Their catastrophic efforts in the Latin Cha-cha-cha and Jive competitions earned them the wrath of the Guamese diaspora worldwide and, according to the Guamish Daily Gleaner, could result in their imprisonment under the Guamite penal code’s harsh sentences for acts that bring the nation into terpsichorean disrepute.

Having embraced the East Asian Games with such obvious enthusiasm, the people of Hong Kong are now widely expected to be given the immeasurable honour of spending yet more billions of dollars on hosting the Asian Games in 2019.  As well as Greater China and northern Asia’s yurt-dwelling, grass- and dog-eating and war-criminal elements, this regional Olympics includes sportsmen from the Orient’s sweatier climes, such as badminton-crazed Malaysians and Indonesians, the polo- and cricket-whizzes of the Indian subcontinent and Vietnamese shuttlecock-kickers, plus puny Singaporean weenies upon whom everyone else will take great pleasure in stomping – as they did with the Guamanians.

A committee of top Hong Kong officials is standing by to design the mascot. 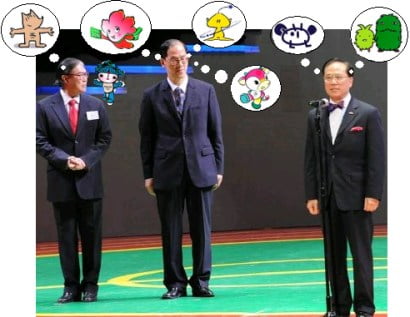 1 Response to Update from Hemlock