“Let them be confounded and put to shame that seek after my soul” (Psalm 35:4)

What is wrong with the nativity scene on the Christmas banner outside the Hong Kong Swatow Christian Church next to the Mid-Levels Escalator on the corner of Shelley and Elgin Streets?  (Let’s leave aesthetic considerations aside in this season of goodwill.)

My knowledge of pre-Islamic Middle Eastern architecture is limited, but I do know that at the time of Jesus Christ’s birth there were no mosques and minarets in Nazareth.  Or anywhere.  Minarets obviously originated from other sorts of tower, but the rocket-with-crescent design follows the founding of Islam in the 7th century AD.  It raises the question of how much members of the Swatow (ie Shantou – Teochew/Chaozhou/Chiuchow/whatever) congregation know about the history of their own faith.

In defence of the designer of the banner, I can think of two points.  1) It’s not as if there were any Swiss in Galilee back in those days to hold referendums, so that might tilt the odds very slightly in favour of the ‘early minarets’ argument.  2) If a virgin could give birth there, what other inexplicable phenomena might have been going on?  (For example, maybe there were Swiss there, in which case… oh, never mind.) 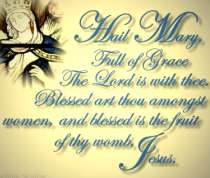 This brings me rather neatly to two theological misunderstandings of my own.  As a young Catholic child I frequently had to recite: “Hail Mary, full of Grace, the Lord is with Thee/Blessed art thou among women/And blessed is the fruit of Thy womb, Jesus.”

Which prompted the obvious question, “What’s a womb?”  It was explained to me briefly that a womb was a pear-shaped thing in a woman’s body where babies grow.  So it was clear: the fruit of thy womb was a pear (a green one as I pictured it).  The good news is that I didn’t make a connection with the Garden of Eden’s famous forbidden fruit, which would have further confused things.  However, I misinterpreted the last line as a direct compliment to Jesus, perceiving it as praising him for the blessedness of his womb.  Or at least its pear.

It was around that time that I have my earliest memories of music associated with Christmas.  I noticed that the melody of one of two songs much heard at the time was based on the other’s.  Amid all the bewilderment the Catholic Church saw fit to sow among its progeny, I concluded that this was a copy – quite a lame one, I thought – of this.  This is how members of the flock start to stray.