Philatelists eager to obtain Hong Kong’s forthcoming stamp marking Professor Charles Kao’s Nobel award will have to be patient while the city’s resourceful residents vie to produce a suitable design following government spending cutbacks.  Given the imaginative flair of, say, pharmaceutical company Lundbeck’s ad agency, it will undoubtedly be worth the wait.

The Standard meanwhile tells readers that the Danish pill makers are defending the advertisement that appeared in the newspaper yesterday.  Against whom or what, the reporter fails to mention.  I for one have heard nothing but praise for the – how can I put it? – boldness and ingenuity of the ‘concepting’, or whatever the guys in ponytails and orange spectacle frames call it these days.  It seems they had little choice but to try extra hard to push the product:

Benjamin Kwong Yiu-sum, president of the Pharmaceutical Society of Hong Kong, said Ebixa is used for severe dementia but is not a cure. “It only offers a very marginal benefit for the patient but it has quite a premium to pay for.”

A flick through the South China Morning Post reminds me of another of Hong Kong’s great creative industries: food and beverage photography.  It is a sad fact that many a budding Man Ray or Annie Leibovitz has no choice but to earn a living either by snapping young couples before their wedding day or taking arty culinary shots for restaurants’ press kits.  I have watched one of these sessions. The cameraman shoots away, while his assistant arranges the lighting and sprays moisture over the fare, the establishment’s manager looks on nervously and his chef engages in obsessive-compulsive positioning of the garnish.  The result is that every restaurant’s promotional material looks identical.

Or nearly every restaurant.  The SCMP today reviews the hitherto unheard-of Drawing Room in the equally previously-undetected JIA Boutique Hotel in Causeway Bay.  The obligatory PR photo (shouldn’t reviewers take their own pictures?) instantly arouses strong olfactory memories.  Where have I seen such succulent, glistening, juicy chunks of meat before? 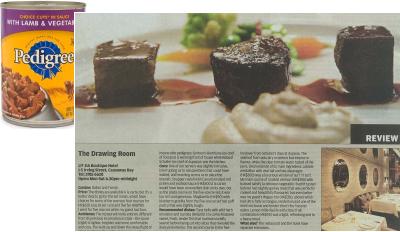