Today is the day Hong Kong indulges in one of its regular games of political charades: the annual budget, in which the government announces its revenue and spending plans for the 2010-11 fiscal year.  The details will be unoriginal, unsurprising, unexciting and, for better or worse, ineffective in changing anything.

Several decades ago, the Big Lychee’s current leaders were junior civil servants.  It was drummed into them that this is a colony: its purpose is to accommodate business; to the extent it requires a workforce, people may settle here, but government should do nothing above and beyond the needs of business to attract or keep them.  Despite their obvious role in creating the city’s wealth, the residents should mainly be seen as a potential burden.  Policymakers must view the population as competing for resources with businesses and government itself and therefore as a threat.

Thus programmed, the junior automaton-bureaucrats embarked on their paper-shuffling careers.  Now, nearly 13 years after the British possession came under Chinese sovereignty, they find themselves thrust into positions of power, in which they robotically implement the only principles of governance they have ever known – those of a politically backward, refugee-crowded, mid-20th Century British colony in which inhabitants are a necessary nuisance. 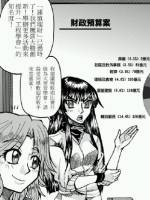 As part of the usual, time-worn charade, Financial Secretary John Tsang asked the community for its views on what this year’s budget should do, even producing a comic book to reach out to the younger generation.  Pro-government parties, notably the Democratic Alliance for the Blah Blah of Hong Kong, were given a list of minor welfare expenditure projects to pretend to suggest, in order to give the impression that officials listen to and adopt outsiders’ suggestions – an abomination in bureaucratic eyes since the 1840s.  Entering into the spirit of things, pro-democratic groups made similar suggestions, usually adding 10 or 20% to the proposed sums of money to be handed out.  Other commentators, including for some reason the clueless and self-interested society of Australian-trained CPAs, tossed in other vacuous ideas involving seemingly random numbers.

The cause of all the fuss is such measures as one-off allowances for the elderly, small rebates for the tiny number of people paying any tax, or inane schemes to help pay poorer students’ Internet bills. Band-aids, in short. Some subsidies, like medical or kindergarten vouchers or tax breaks for mortgage payers, are probably absorbed by higher rents charged by doctors’ and nursery schools’ landlords and higher prices charged by property vendors – in other words, it ultimately ends up in you-know-who’s pocket.

Some lone voices cry for genuine reforms, like a serious rebalancing of the ratio of capital to recurrent expenditure, a broader and more transparent revenue base or an end to the pathological accumulation of reserves.  (The main consultation document repeatedly frets about the ‘depletion’ of fiscal reserves in recent years and makes it clear that rebuilding the hoard of wealth is a priority.)

Much excited chatter will concern tax rebates, even though only a minority of people will be affected, and none of them will detect a meaningful difference to their wealth.  To paraphrase from the document: of Hong Kong’s 7 million people, 3.5 million form the workforce, and only 40% of that (1.4 million people) pay any salaries tax.  The top 100,000 salaries tax payers (1.4% of the total population) contribute 79.4% of the salaries tax revenue, or 8.3% of total government revenue.  This is, among other things, a reflection of the large number of people on surprisingly low incomes in this supposedly high-GDP economy.  The bizarre numbers in a table: 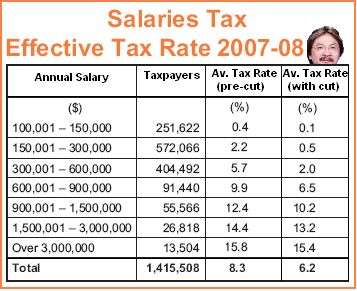 Corporate taxes follow a similar pattern.  Nearly 73% of profits tax (18.5% of total government revenue) came from the top 1,200 taxpaying corporations in 2007-08. Another 78,500 companies paid the remaining 27.4%.  That leaves literally hundreds of thousands of registered businesses mysteriously failing to make enough profit to pay tax.  Even the worst-squeezed find enough loopholes and allowances to pay a rate well below 16%.

What the numbers don’t show is the impact of the huge hidden taxes represented by the high land price (or artificial accommodation scarcity) policy.  This invisible levy is built into many or even most commercial transactions in Hong Kong and is largely collected by landlords and developers who keep a big slice for themselves, like medieval tax farmers.  For people paying private-sector housing rent or paying off a mortgage, the real personal tax rate in Hong Kong is probably far closer to the 35-40% people pay in the Western world.  For people like me, who paid off the mortgage years and years ago, the system makes an above-50% savings rate effortless.  From a purely selfish, personal viewpoint, long may the colonial zombies reign.